Serving our community for over 200 years making disciples for Christ

News From The Pews

« Back to News From The Pews « Older Entry | Newer Entry »

Our Cross: A Reminder of Memorial Day 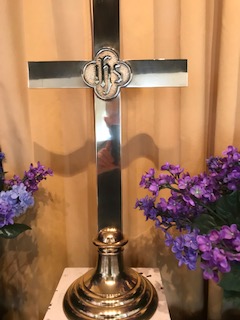 When I first thought about doing a story for Memorial Day
I had NO CLUE that the story I would share would have
the impact on me as this one has...


You see...
This story is about the small cross that stands
on our altar and how it came to be...

For those who may not know...
The Smith family has been a prominent fixture in our
tiny church family dating back to at least World War 2...
(maybe before, but I'm not certain)

On the back of the cross
it reads:

Dr. and Mrs. Sidney Smith
In memory of our son
Lt Roger Eastman Smith
Killed in the service of his country
1921-1944

Thanks to the help of Linda Treby and Charles Manning
we now know how this cross came to being and the importance
it holds especially as we enter Memorial Day weekend...

Being this is Memorial Day weekend, we felt it was best
to share the story of Lieutenant Roger Eastman Smith
and his bravery at the battle of Guam for which he lost
his life and the cross was dedicated to his name...

The Battle of Guam

In the hours following the attack on Pearl Harbor 7 Dec.1941
the Japanese military stormed the island of Guam.

The original battle began 8 Dec and lasted until 10 Dec.
when the Japanese had taken full control of the island...

In Attacking Guam, U.S. forces were not just aqcuriing a fine harbor
and a number of airfields to use in future operations, but were also
liberating a U.S. Territory..

The Japanese forces on the island had built an elaborate network
of bunkers, artillery placements, and other fortifications (pillboxes).

The landing began on 21 July on the west coast of the island
and the landing force consisted of both Marine and Army units
from General Gieger's III Amphibious Corps, in all 55,000 strong.
They were soon established solidly ashore despite a series of fierce
night attacks by the Japanese over the first few days of the battle.

It took a week for the Americans to link their two beach heads, but
by then much of the Japanese strength had been dissipated and their
commanding general had been killed as well...

The surviving Japanese units fought on for another two weeks,
gradually retiring toward the North end of the island, before
organized resistance largely ended.

Even then Guam's mountainous terrain helped a few die hards
to hold out. Some small units fought on until after the war,
causing occasional U. S. casualties, and one solitary veteran
only emerged from the jungle to surrender and return
to Japan in 1972.

One Of Our Own 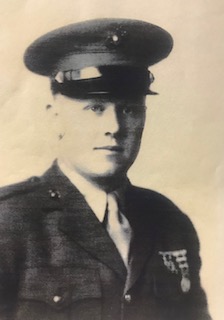 Was called to active duty on 27 January 1943 as a
member of the Seventeenth Candidates Class,Marine Corps.
School, Quantico, Virginia, with the rank of 2nd Lieutenant.

Was subesequently promoted to 1st Lieutenant.
Was killed in action on 21 July 1944.

Memorial services were held on 8 October 1944
at Salem Methodist Church in Murfreesboro, Rutherford County,
Tennessee. Dean N. C. Beasley and Mrs. Mary Dennell, each of
whom knew Lieutenant Smith spoke at these rights.

Smith - Rogers - Reeves VFW Post was named for three of the
Rutherford County young men who lost their lives during World War II.

3. Navy Unit Commendation with ribbon bar
Awarded the First Provisional Marine Brigade for service
on Guam in the Marianas Islands.

"For extraordinary heroism as Mortar Platoon Leader attached
to the First Battalion, Fourth Marine Reinforced, First Provisional
Marine Brigade, in action against enemy Japanese forces on
the island of Guam in the Marianas islands on 21 July 1944.
Moving his mortar platoon up from the beach in the rear of
advancing riflemen, First Lieutenant Smith obeserved a wounded
rifleman lying close to a hostile pillbox and, halting his men, fearlessly
advanced to the aid of the marine under a continuous barrage
of Japanese emplacement.

Engaging the enemy with rifle fire and hand grenades, he held
his position despite the fierce oppostion and attempted to neuteralize
the pillbox with a flame thrower, but failing in this he continued to move
up on the ememy while firing his rifle and, although mortally wounded
during the bitter hostilities, succeded in silencing the hostile gun - battery.

By his determined initiative, valiant fighting spirit, and resolute fortitude
in the face of terrific odds, First Lieutenant Smith contributed maerially
to the ultimate success of our forces in recapturing this vital strong - hold,
and his nwavering devotion to duty throughout was in keeping with the highest
tradition of the United States Naval Service.

He gallantly gave his life for his country."

As I prepared for this story SEVENTY FIVE YEARS after First Lieutenant Smith's death
I can't help but to wonder WHY he was never granted the Medal of Honor???

If you have time this weekend, I encourage you to re-read the above citation
and then visit the following website to read stories of those who were awarded
the medal during World War II.

I brought this story to the website a few days earlier than planned because
I want those who attend church this weekend to SEE the cross and UNDERSTAND
that this small cross is just a tiny token for one man's bravery and a family's loss...

It's a small reminder that Memorial Day isn't about cookouts and three day weekends...
It's about those who gave their life so we can enjoy ours today...

Thank you sir for your service and sacrifice.