Serving our community for over 200 years making disciples for Christ

News From The Pews

The BEST place to find out what is going on at Salem UMC is right HERE.

Welcome to Salem UMC's home on the web!!!
This is where you will find all the up to date information on all things Salem UMC!!!
This site is upated regularly, so if you have a story that you feel would benfit our church
or our community - we want to hear from YOU!!!

Simply email your story to:
salemworship@yahoo.com

Ash Wednesday Drive-By will be done again in the church parking lot on 17 February 2021, 2:15-4:15 pm.
We will hand out snack bags (planning for 48) and looking for volunteers to get chips and crackers.
We have the water and cookies taken care of. Also need volunteers to help during the event.
Please let Beryl or Brother Thad know how you can help.

Ash Wednesday Program. We will kick off Lent with the Drive-by and a Zoom Program at 6:30 pm lead by Brother Thad.
This will start our weekly Lenten study. Set aside Wednesdays 6:30-7:15 for study and fellowship. More details to follow.

A Section of Rucker Lane from near Muirwood Boulevard to Veterans Parkway will be advertised for bidding in January with reconstruction work projected to begin in Spring 2021. The roadway project will take about a year and a half to complete.

Phase 1 of the project is estimated at $5.1 million and will upgrade a one-mile section of Rucker Lane with a three-lane street section including curb and gutter and sidewalk.

Phase 2 of the Rucker Lane reconstruction will improve the road from Muirwood Boulevard to Franklin Road (Hwy 96) and is planned to begin near completion of Phase 1.

The Rucker Lane project was designed by Wiser Consultants and is funded by the City’s Community Investment Program (CIP).

Article taken from the DNJ

Salem Elementary Principal Trey Duke will be the next Murfreesboro City Schools director, the Board of Education decided Tuesday night.

"I'm just excited to work for the students and the teachers of Murfreesboro City Schools," Duke said after the 4-3 vote. "A strong public education system is key to a strong community, and I want Murfreesboro City to continue to be the best of the best."

Duke will oversee a pre-K-6 district that had 8,361 students at 13 campuses as of Nov. 10. The board expects to approve his contract by Feb. 9 and for Duke to start April 5, Chairman Butch Campbell said.

Duke was one of five finalists for the job. The runner-up was Chris Treadway, principal at Poplar Grove Middle for Franklin Special School District. Treadway was principal at Rock Springs Middle principal in Smyrna from 2011-16 before leaving Rutherford County Schools for Franklin.

Duke will replace director Linda Gilbert, who died in May following a stroke. Interim Director Ralph Ringstaff has led the district since then in addition to his role in overseeing human resources for the system.

The board hired the Tennessee School Boards Association for $11,500 to conduct the search. Other finalists reccomended by TSBA were Tammy Garrett, principal of the city's Mitchell-Neilson Schools since 2019; Christina Harris, Wilson County Schools director of educator effectiveness since 2019; Kimberly Osborne, coordinator of data and assessment for Murfreesboro City Schools since 2018,
and former principal at Reeves-Rogers Elementary.

Moore prior to the vote said all of the finalists were exceptional.

"There was no clear winner," said Moore, adding she had a hard time deciding who she thought was best for the job.
"This was incredibly difficult."

Before joining Murfreesboro City Schools, Duke was coordinator of federal programs and response to intervention for Rutherford County Schools (2017-19) and its coordinator of instructional technology (2013-17).

Here are some Scriptures to consider as we prepare for our Christmas Eve Service together
on Zoom this Thursday evening at 6:30pm.

Christmas Grace to you.

Christmas Eve 2020 will be one like no other...
As you know by now we are not able to worship
in person so this year we will be worshiping
via ZOOM!!!

The service will begin at 6:30 and we will share
in holy communion...
(make sure to have bread & drink)

Last Tuesday we had 15 folks who Zoomed in for Advent Study #2 on Mathew 1.

The study was great and the conversations were rich. It is so good to be with all of you on ZOOM!

This week let's take a look at some of the prophecies concerning the Advent of Messiah.

Here are some Scriptures we will consider:

Isaiah 11:1-5 A shoot will come up from the branch of Jesse (and the entire chapter);

Daniel 7:13 “I was watching in the night visions, And with the clouds of the sky, one like a son of man was approaching.
He went up to the Ancient of Days and was escorted before him. 14 To him was given ruling authority, honor, and sovereignty.
All peoples, nations, and language groups were serving him.His authority is eternal and will not pass away.
His kingdom will not be destroyed.

Christmas Joy to you!

Our first Advent Study, last Tuesday, was very interesting. 13 folks were Zooming in with us.
Lots of good involvement! We looked at Mary's prophecy in Luke 2, also known as "The Magnificat."
She glorified God Who had worked mightily in her to begin the process of salvation for all people.
The little one within her was the Son of God. We also read of Elizabeth and Zacharias and the birth of John the Baptist.
This was also a miraculous pregnancy, for Elizabeth was barren and quite old.

This Tuesday, December 8, at 6:30PM, we will look at the first chapter of Matthew's Gospel.
It's the story of how Joseph, Mary's betrothed, reacted when he learned of her being with child.
Both Matthew 1 and Luke 3 have genealogies of Jesus, but they are different, wonder why?
Please read Matthew chapter one in preparation for our conversation.
Each session will be one hour.

And if we have time we will look at some of the Old Testament Prophecies of the First Advent of Messiah, Jesus.

You are welcome, invited and encouraged to Zoom in next Tuesday.

The first three of our Advent studies are on Tuesday and the fourth one is on Thursday, Christmas Eve.

Please reach out to Pastor Thad Collier for your Zoom invite...
thad38556@gmail.com

Much has been happening at Salem UMC since we were able to resume in-house worship July 12, 2020. Unfortunaly the COVID 19 rate of transmission has continued to increase to the point we must now stop in-house worship for a time.
We will resume when the leadership feels it is safe to do so. Remember, “For nothing will be impossible with God” Luke 1:37"

.
Brother Thad, Joel, and Laura will be the only people present in the sanctuary.
The bathroom will be available if needed during worship time and remember to wear a mask (cleaning instructions are posted).
You will be able to participate in Sunday worship from your car in the parking lot either on FM 89,3
or FB Live or from your home on FB Live or the website later on Sunday (thank you Joel).

Another great way to keep up with our group is by joining us for the Advent Study by Zoom.
We had the opportunity last week to share and learn from each other as we studied God’s word.
Thank you Brother Thad for making this possible.

If you would like to participate in the Zoom Advent Study please reach out to Brother Thad Collier
thad38556@gmail.com

Sunday (Nov.29th) is the beginning of Advent...

If you would like to take part in the Advent readings
this year please see Linda Trebey or pastor Thad Collier...

Advent is a season of the liturgical year observed in most
denominations as a time of expectant waiting and preperation for
both the celebration of the Nativity of Christ at Christmas and the return
of Christ at the Second Coming...

Advent is the the beginning of the liturgical year in Western Christianity.

Hanging of the Greens 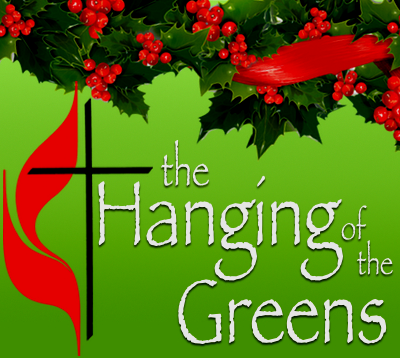 If you would like to take part in the Hanging of the Greens
this year please sign up or see Linda Trebey...

Due to the pandemic we are doing things abit differently
and therfore doing the decorating in "small groups"...